When cars crash in an auto race, the yellow flag comes out. This requires drivers to slow down and stay in their positions, allowing time for the crews to move the debris off the track so it can be safe to resume the race.

Drivers have little margin for error, with their cars separated by inches, (literally) less than a blink of an eye. A safe turn can become a multi-car crash in a split-second. The economy does not turn on split-second decisions, but is guided by policies that play out over months. Fiscal and monetary policy mistakes have brought out the yellow flag for investors, for good reasons.

Inflation is the principal cause of the markets’ unease, and fully the (ir)responsibility of the Federal Reserve. We have heard numerous excuses (umm, explanations) for the rise in inflation. The president’s economic team would have us believe it is due to supply disruptions emanating from the pandemic lockdown that will soon abate as the economy reopens. That has been proven false. Other economists cling to their output gap models that “measure” the gap between the unemployment rate and the NAIRU (Non-Accelerating Inflation Rate of Unemployment, I kid you not). NAIRU is not an observable number, so economists just guess at what it might be. Economists are usually well-educated, so their guesses could be called educated ones, but they are still guesses and, more importantly, they are wrong.

You can see a more detailed discussion on the webinar link, but the Fed has allowed inflation to take root in the economy, and this is bad news for everyone. Workers have enjoyed robust nominal wage gains, but these have been more than eroded by higher inflation, as the chart shows. Nominal gains of 4.5% over the past year have been converted by inflation to a decline of 3.5% in real terms. 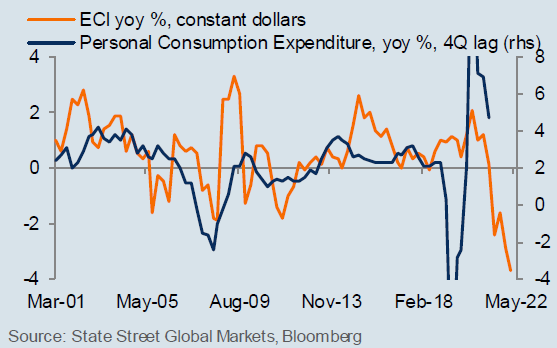 Investors are harmed by inflation that devalues future cash flows. Equities are down 16% this year, while high-quality bonds are off 10%. Investors have few places to hide from the scourge of inflation.

Inflation may come down from its torrid 8 ½% pace for technical reasons, but it will not be vanquished until monetary policy tightens significantly. Despite the tough rhetoric from Chairman Powell, the Fed has not accepted that its models are wrong or that a significant and immediate tightening is required. A full percentage-point hike would be a good start. In its absence, inflation will remain elevated, stealing from wage-earners and investors alike.

The Fed will be forced eventually to tighten more than they hope. This additional tightening raises the risk of recession, not in the immediate future, but soon. Right now, there is sufficient strength in the economy to avoid a contraction. Household and corporate balance sheets are healthy, profits are high and the demand for labor is as strong as it has ever been. There are 11 ½ million job openings, the most ever. So the economy has some strong tailwinds.

China and Russia represent near-term risks to the global economy. China continues to pursue its policy of zero-COVID, requiring the lockdowns of tens of millions of people and causing its economy to slow. For more than two decades, more than half the world’s economic growth came from China, and its economic problems impact the rest of the world materially. A prolonged, or more severe economic downturn in China could push the global economy into recession.

Russia’s disastrous war in Ukraine is impacting Europe’s economy especially by withholding supplies of key materials, primarily energy, agriculture and minerals. Even should the war devolve into a lower-level conflict, the supply of materials from Russia and that region will likely remain severely constrained for some time, thus hampering economic growth everywhere.

The drop in asset prices this year has been modest in historical terms. But until inflation is brought down by tighter monetary policy, investors will continue to face a very challenging environment. We have responded by raising cash in our portfolios, and by shortening duration in fixed income and in equities by favoring high-dividend stocks. We cannot escape the downturn in asset prices, but we can hope to lessen the pain.

Policy mistakes have brought out the yellow flag. The debris on the track will not be cleaned up until inflation is under control. Only then will it be safe to resume the race.

Until then, it is a time for caution. Stay in your lane. Drive safely.