Let me stipulate up-front: I love Greece. Everything about it: the food, the weather, the history, the music, the people. Everything.

But I wouldn’t lend them my money. Greece has a long (very long) history of borrowing money with little regard for paying it back. I’m not casting aspersions, or taking a moral stance, just saying the facts. As the calendar flips from May to June, we are about to come to (another) moment of truth about Greek debts. Or rather, their lenders are about to come to this moment of truth.

And what is that truth? Greece cannot pay. The European Central Bank and the IMF would like to think this is Greece’s problem but, of course, it’s really theirs. Over the next two months, Greece is due to repay nearly €8 billion (table below). Through various gimmicks, Greece might be able to come up with about €2 billion. You see the problem. 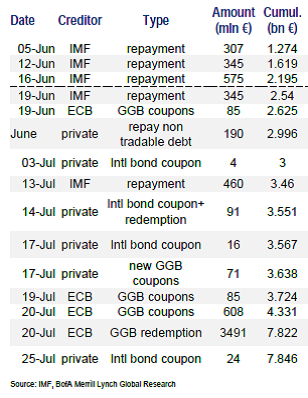 Greece has already undergone an enormous contraction. Its GDP has fallen 27%, and it has slashed its fiscal and current account deficits from between negative 12% and 20% of GDP to surpluses. These are Herculean adjustments. 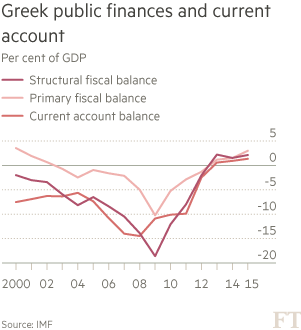 No matter. The clock is about to run out. So it’s really not about what Greece can/will do; it’s about what the ECB/IMF can/will do. I don’t know the answer to that (I’m not sure the ECB or IMF do either). Whatever their decision, the unintended, unforeseen consequences could be momentous. Yasou!