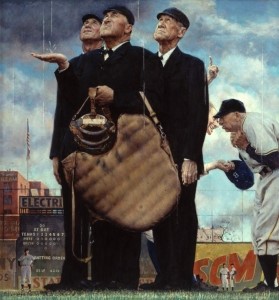 Jesse Livermore was a legendary stock trader of the early 20th century. Mere rumors of his involvement in a stock could send its share price soaring.

Back then, Livermore organized stock “pools,” in which his friends, the titans of industry and finance, would trade with each other, pushing the price of a stock up. This would attract other speculators, driving the price even higher, until the insiders dumped their shares at an enormous profit, wiping out those who came in late to the game.

In 1934, the Securities Exchange Act banned this practice of “pump and dump.” Section 9 of the Act makes unlawful “for any person, directly or indirectly,” the “raising or depressing the price of [a] security, for the purpose of inducing the purchase or sale of such security by others.”

Last week saw an “uptick” in trading in selective stocks. Blackberry (yes, it’s still around), normally trades about 10 million shares per week. It saw 1.3 billion of its shares traded last week. AMC Entertainment, the largest movie theater chain in the country, which trades around 20 million shares per week, saw more than 3 billion of its shares traded last week. The volume would have been more had trading not been temporarily halted.

The poster child for all this is GameStop, today’s equivalent of Blockbuster, whose stock has soared from $4 to $470 (see Chart). Last summer, whether out of genuine investment analysis or nostalgia for “the good ol’ days,” presumably defined as when we all walked around with Blackberries, when theaters were the only place to see a movie and we had to go to a physical store to buy a physical game, someone posted an opinion that GameStop was undervalued and should be bought. 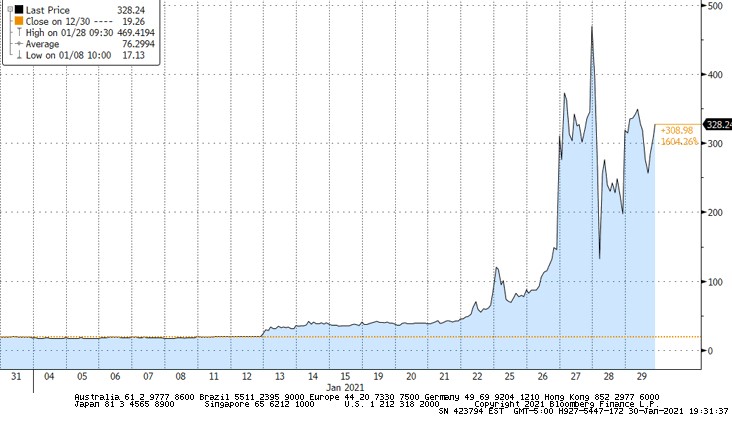 What began as one person’s investment opinion, one among literally millions, took on a life of its own when others learned that GameStop was a heavily shorted stock by hedge funds. The forum, most prominently WallStreetBets on Reddit, became an organizing center to encourage readers to buy GameStop stock, not so much because it was deemed undervalued, but because (evil—goes without saying) “hedge funds” were short GameStop, and a “squeeze” on those shorts would inflict losses on these funds. A read of the comments on WallStreetBets (known as a “subreddit’) shows the vast majority profess a desire to disrupt “Wall Street” rather than to engage in a reasoned, profitable trade. That description is a bit generous: much of the commentary is filled with hateful expletives about “the system” and targets for harassment certain finance people specifically.

No one will feel sorry for fund managers who make obscene amounts of money, which may be the only thing both Ted Cruz and Alexandria Ocasio-Cortez agree on. And the “Redditers” applying this short squeeze have a legitimate complaint about “the system.” Following the mortgage collapse in 2008, the banks were bailed out while millions lost their homes and their jobs. Monetary policy has helped to inflate financial assets, benefitting the wealthy while incomes stagnate for nearly everyone else (we’ve written about this frequently, most recently here https://www.angelesinvestments.com/insights/investment-insights/4th-quarter-2020-na-triobloidi and here https://www.angelesinvestments.com/insights/investment-insights/2nd-quarter-2020-dreams-deferred.

So where does this leave us and how will it all end?

I see these events raising considerations in three broad areas. The first is among professional investors and their risk controls (or lack thereof). GameStop was one of the most heavily shorted stocks, with 260% of its float shorted. Its stock price had fallen from over $45 to under $3 in the previous five years. Why were managers still short this stock? Were they hoping to squeeze the last drops of profits in a stock that was massively short and had already lost more than 90% of its value? And what was the sell discipline when the stock started rising? Why weren’t the shorts covered at $5 (September) or $10 (October) or $20 (December) instead of $300 (January)? Holding these shorts under these conditions can only be attributed to greed, and failing to implement a sell discipline can only be characterized as incompetence. No one is weeping for these so-called professionals.

The second consideration is in the area of regulation. There is an argument that the actions of the “Redditers” violate Section 9 of the Securities Exchange Act of 1934. That is a legal technicality. The real question is whether the public is served by restricting this behavior. There is the platitude of protecting the “integrity of the market,” but that seems to me to be a vague and naïve argument. My understanding of the intent behind the Securities Exchange Act, and subsequent securities  laws and regulations, was to protect the unsophisticated public from unscrupulous financial professionals, not the other way around. So I do not favor additional regulation to protect financial professionals from the public, or the public from themselves.

Lastly, and most importantly, is the social dimension of this phenomenon. There is an element at play here of hateful populism, personal harassment directed at specific individuals and a driving vengeance to tear down “the system” that is seen as inherently corrupt and unfair. One can reasonably disagree with this characterization, and cite the confluence of social media and free stock trading as contributing to the rising power and anger of a “mob.” But one cannot deny the extremes in wealth and income inequality that fuels much of this anger.

The power of social media to organize large groups of people is a fact. We have seen that power used to instigate violence and subvert our democracy. And to squeeze the shorts of some hedge funds. But that same power can effect positive change for racial justice, economic equality and climate change.

How will this short squeeze end? Badly; most people will lose most of their money. That is how it always ends. Jesse Livermore, whom some consider the greatest stock trader in history, died penniless. 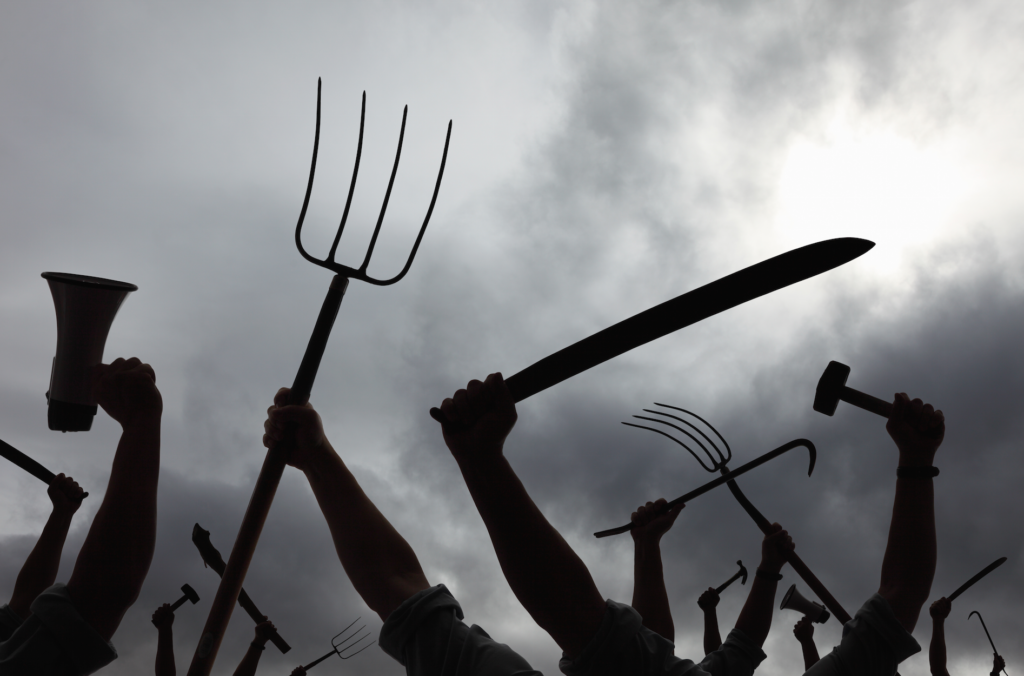