PUT DOWN THE GUN

Tombstone, Arizona is a small town of around 1300 folks along the Mexican border. In 1881, it swelled with more than 7,000 men seeking their silver fortunes, along with thousands more women, children, Mexicans and Chinese (who weren’t counted in the census). Horse rustling, cattle theft, smuggling and shootings were common, and to protect the peace, Virgil Earp was hired as Deputy US Marshall for Pima County. He brought his brothers, James, Morgan and Wyatt, for support. 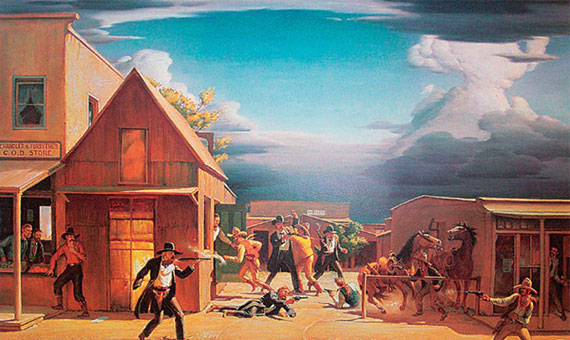 To get control of the lawlessness pervasive in the territory (Arizona became the 48th state in 1912), Virgil imposed an ordinance requiring anyone entering town to deposit his weapons at a livery. Needless-to-say, this ordinance was not popular with everyone, in particular, Frank and Tom McLaury, Billy and Ike Clanton, Billy Claiborne and Wes Fuller, a gang of bandits known locally as the Cowboys. The Cowboys had a number of standing feuds with the Earp brothers and with a dentist-turned-gambler, “Doc” Holliday.

The Earps and Holliday were not expecting a fight with the Cowboys when they encountered them along Fremont Street, down from the Old Kindersley (O.K.) Corral, on October 26, 1881. But when Virgil saw the Cowboys were carrying pistols and rifles, he demanded that they turn in their weapons. It is unclear exactly what happened next, but by most accounts Billy Clanton and Wyatt Earp fired simultaneously, and thick black powder smoke engulfed the street. When the smoke cleared a minute later, Virgil and Morgan Earp had been hit with bullets, but would survive, Doc Holliday was grazed by a bullet, Wyatt Earp was untouched, and Billy Clanton, Frank and Tom McLaury were dead.

Like Billy Clanton, when confronted with a potential threat, investors often prefer to shoot first. Chinese officials first alerted the World Health Organization (WHO) of an outbreak of coronavirus (since designated COVID-19) on December 31. As the number of infections grew, deaths followed, and markets were unperturbed. Only in the past week, when cases appeared outside China, have markets reacted swiftly, with US equities falling 7.5% in the past five days. Likewise, copper prices have plunged more than 10%, oil more than 15%, and US Treasury bond yields have plummeted from 1.92% at the start of the year to 1.35% today, an all-time low.

The impact in China has been substantial. The number of confirmed cases continues to rise (as does the number of recovered cases—see below), and economic activity in China has ground to a halt. Passenger traffic (airports and train stations) is a fraction of normal activity (second graph below). The good news (and it’s not much) is that pollution levels in China are the lowest in years (third graph below). 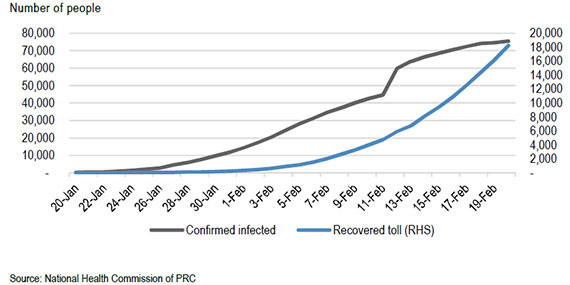 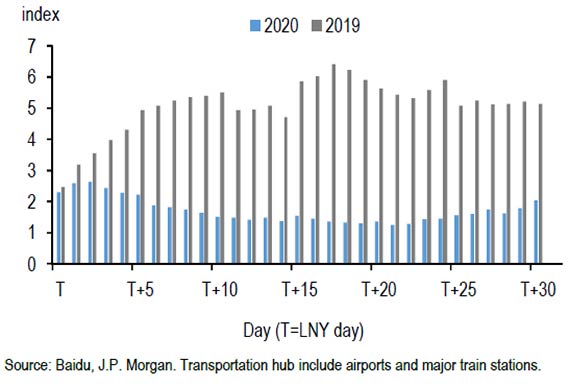 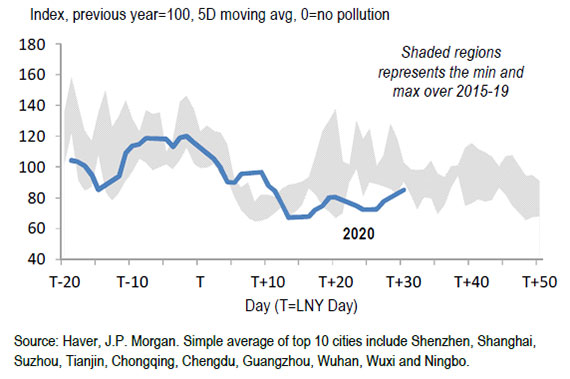 It used to be said that when the United States sneezes, the rest of the world catches a cold (a phrase Austrian diplomat Prince Klemens von Metternich was said to have applied to France in the early 19th century). But China is nearly, maybe more, important to the global economy than the United States. COVID-19 will impact China the most, but few countries will be immune from the effects. China is central to the global economic supply chain, responsible for the manufacture of intermediate equal to 1.7% of US GDP. That is twice the weight of Canada or Mexico. The impact on other manufacturing economies, such as Germany and Japan, is even greater, and we are already seeing spikes in delivery delays (graph below). Shipping rates have plunged 80% since September (second graph below). 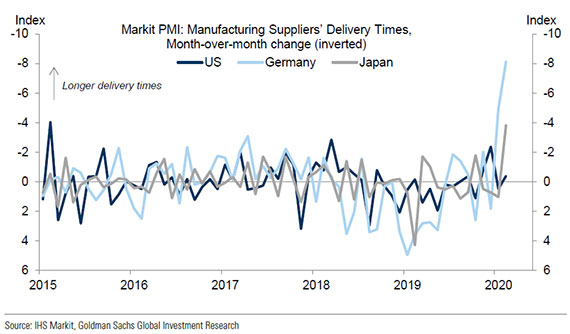 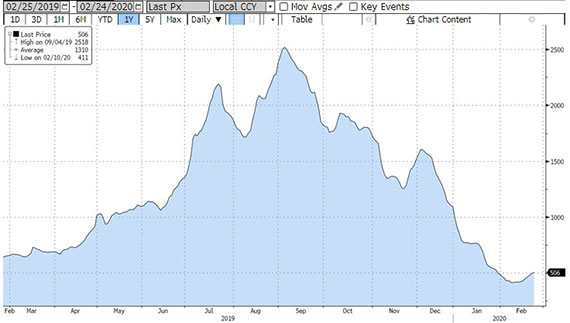 Markets are wobbly, new infectious cases are appearing around the world (even as new cases in China seem the be slowing), and it is unclear when China’s economy, and the world dependent on it, can get back to normal.

Following the massive Tohoku earthquake in 2011, Japanese industrial production dropped 40%. But Japanese production fully recovered in about nine months. At the moment, the economic disruption from COVID-19 is likely to shave around 1% off of US GDP this quarter, but assuming peak cases occur soon, the impact on economic output for the year should be negligible. The labor market is tight, incomes are rising, and monetary policy is accommodative. It would take a much more prolonged economic disruption to send the US economy into recession. Absent a recession, markets will tremble, but will not crash.

Shooting first did not turn out well for Billy Clanton. Shooting first during the SARS scare in 2003 or the Zika virus spike in 2015-16 didn’t work out well for investors, as US stocks fell nearly 13% each time and recovered quickly. We don’t know how COVID-19 will play out, but cool heads will prevail. Our advice to investors, as it would be to the Clanton and McLaury brothers, is: put down the gun.