For the past few years, oil has held steady at around $100/barrel, as supply and demand were largely held in check. Supply was disrupted in Libya and South Sudan, Venezuela saw production tumble due to incompetence and inefficiencies plus sanctions on Iranian exports more or less offset rising production in North America. But about 6 months ago, the world economy (esp. China, but also Europe, Japan, Brazil, et.al.) began to slow at the moment when Libya quadrupled its output to 1 million bpd. When weakening demand collides with a spike in supply, the result is a plunge in prices, in this case, from about $110/barrel to under $70/barrel.

Historically, the Saudis acted as the supply governor in world oil markets: as prices rose, they pumped out more, as prices fell, they throttled back, helping to stabilize the price (see Chart below). Until July, when the the Saudis met the surge in Libyan production with a shrug, keeping their production at close to a record 10 million bpd. Thus followed a swift and sharp 40% drop in the price of oil. But, why did the Saudis allow this to happen? 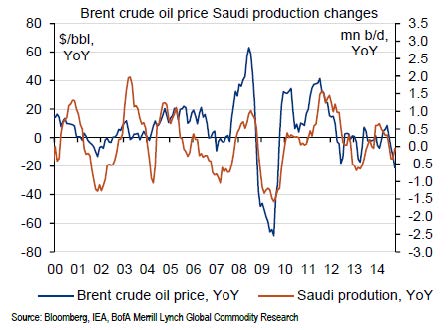 Politics. Who is most hurt from the big drop in oil prices? Venezuela? certainly, as oil revenues pay for 65% of its budget, but Venezuela is a complete mess, grossly mismanaged on every level for over a decade. Russia? yes, but Putin has accumulated a few hundred billion dollars of rainy day reserves, and while the drop in oil will send the Russian economy into a recession, Putin still has money, nuclear weapons and leverage over the Europeans dependent on Russian gas this winter. Iran? now we’re talking! Iran is Saudi Arabia’s natural enemy: a formerly great and powerful civilization strategically positioned geopolitically and self-anointed leader of Shi’a Muslims worldwide, a direct threat to the Saudis, Sunni guardians of Mecca and Medina, Islam’s two holiest sites. The Saudis and Iranians are engaged in proxy wars from Syria to Yemen. But Iran’s economy is in shambles, and it is highly dependent on oil revenues.

So I see what’s happening in the oil markets through a geopolitical lens, a move by the Saudis to inflict maximum pain on arch-rival Iran. You’re welcome to agree or disagree with this narrative, but irrespective of the causes, the drop in oil has enormous global consequences. More on that in the next post.