Declining oil prices provide a net benefit to the global economy. A rule of thumb is every $10/barrel transfers around $330 billion, about 0.4% of world GDP, between oil producers to oil consumers. So there are winners (consumers) and losers (producers), but overall, the decline in oil should lead to global GDP growth around 0.5% higher next year than it otherwise would be.

The US is both a large consumer and producer of oil, but we are still net importers.  Petroleum-related costs should fall about $280 billion, whereas the losses to US producers will be around $130 billion, for a net benefit of $150 billion, around 0.8% of US GDP. A US-rule of thumb is every $10/barrel change translates to $38 billion, or 0.2% of GDP.

So, the big picture is a net positive for the US and world economy. Clearly, last week the capital markets adjusted valuations accordingly, with those countries most sensitive to the price of oil seeing the biggest adjustments in both equities (first chart below) and in currencies (second chart below). The price decline will hurt North American energy producers, but not as much as one might think. Even just a year ago, the working assumption in the industry was that North American tight (shale) oil had a marginal extraction cost of around $85-90/barrel, but with better data and (almost daily) advances in technologies, 80% of tight oil is profitable between $50-69/barrel, with a number of regions well below that (see chart below). The result is that oil at $65-70/barrel may have little impact on North American production. Rather, the biggest losers will be those with high marginal costs of extraction and those seeking to attract capital for new projects (Brazil, Mexico). 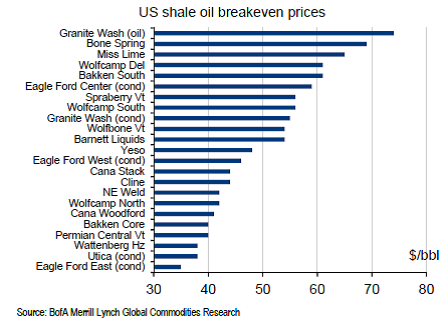 The geopolitical implications are potentially vaster and more profound, but also much more uncertain. The OPEC cartel may have finally imploded permanently. One implication is that instead of the cartel (really, just the Saudis) adjusting supply to manage the price, the price will now adjust to establish the supply/demand equilibrium. This means higher price volatility, but also a more efficient distribution of resources.

The Saudis are clearly using lower prices to inflict pain on Iran, as that regional rivalry intensifies. Russia has generally supported Iran politically, and the Russian economy will suffer from lower oil prices. But it is unclear whether this economic pain leads to moderating political behavior by the Iranians and Russians, or to more desperate, destructive actions.