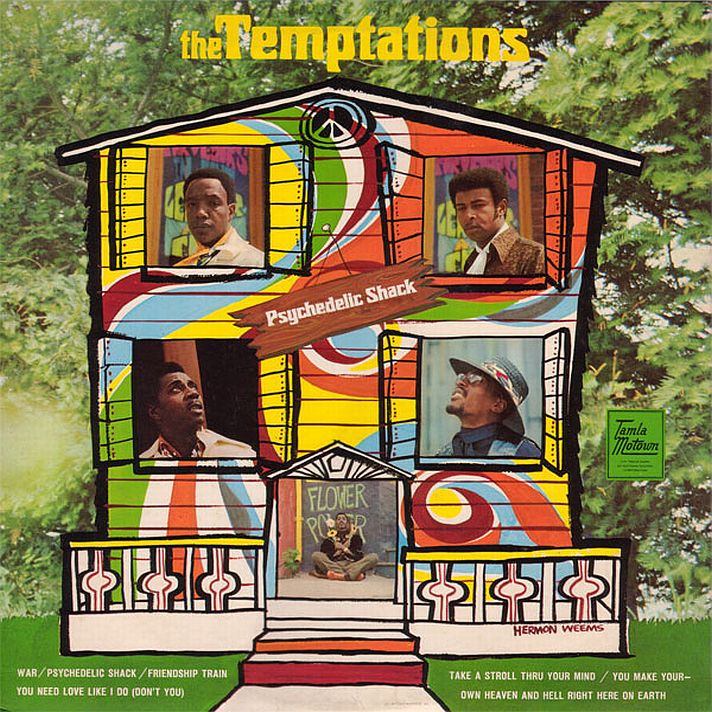 Berry Gordy, the legendary founder of Motown Records, had a genius for spotting talent and creating stars: Mary Wells, Diana Ross and Gladys Knight; Marvin Gaye, Smokey Robinson, Stevie Wonder and the Jackson 5, among many others. But Gordy was much more than a talent scout; he developed a signature sound for all his artists, the “Motown Sound,” that utilized sophisticated melodies, back-beat rhythms, and complex arrangements with horns and strings. The result was more than 100 top ten hits in the decade 1961-71, an extraordinary achievement.

Amazingly, no Motown artist was recognized by the Grammys until 1969, when the label’s most prominent male group won for the song Cloud Nine. The Temptations had recorded a number of influential hits, including My Girl, Just My Imagination and Papa Was A Rollin’ Stone (more than 50 years later we can instantly recall every one of them). The Temptations epitomized the magical Motown Sound, with their smooth five-part harmony and tight choreography, the group was wildly popular.

In 1970, a new sound began to emerge, edgier, with more funk. Think of Sly Stone. The Temptations broke with their past by releasing an album, Psychedelic Shack, which was, well, psychedelic. The title track was the only single released from the album, but the album contained an anti-war song written by Motown hitmakers Norman Whitfield and Barrett Strong that struck a chord with listeners who clamored for Motown to release it as a single. Gordy was reluctant to associate his top-selling group, with wide cross-over appeal, so closely with a protest song, and hesitated about issuing it as a single. Its lyrics, which Gordy thought might offend what Richard Nixon called the “Silent Majority,” who bought his Motown records by the millions, contained these lines:

War is something that I despise

Because it means destruction of innocent lives

When their sons go out to fight and lose their lives.

It ain’t nothing but a heartbreaker

Friend only to the undertaker

War is the enemy of all mankind

The thought of war blows my mind.

War has caused unrest within the younger generation

Induction then destruction, who wants to die?

Edwin Starr had a hit record in 1968, Twenty-Five Miles, but was very much a second-tier artist in the Motown factory.  His voice was rougher than the typical Motown vocalist, exuding an energy and emotion more like his idol, James Brown. Starr heard of Gordy’s hesitancy to release the song as a Temptations’ single, and he jumped at the chance to record it. We’ll come back to the song in a moment.

The media are filled with headlines this week of “Trade War,” as President Trump announced higher tariffs on Chinese imports and China suspended imports of US agricultural products and permitted the renminbi to fall to its lowest level against the dollar in over a decade (graph below). The US Treasury Department then responded by designating China as a currency manipulator, which sends the case to the IMF for review, where it almost certainly will decline to support the US position. But the designation enables the president to impose more tariffs.

Economists don’t agree on much, except this: tariffs are stupid (I’m paraphrasing). This is what Adam Smith wrote in 1776 in Wealth of Nations, and has been the accepted wisdom for the past 223 years.  Politicians have generally paid attention, as tariffs have been falling steadily since the 19th century, with a disastrous interlude in the 1920s and 30s. The Fordney-McCumber Tariff of 1922 raised tariifs on European agricultural imports that only served to close European markets to US farmers. The infamous 1930 Smoot-Hawley Tariff sparked another round of worldwide tariffs, and helped contract global trade by 67%. Smoot-Hawley was (thankfully) repealed in 1934. Since that colossal error, tariffs have declined (see graph below) and global trade has surged, helping to create the highest levels of world prosperity in history. 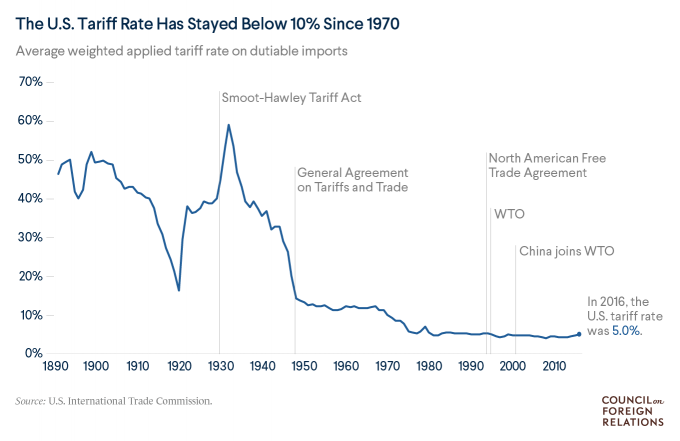 Adam Smith, David Ricardo and economists ever since have decried tariffs as inefficient and counter-productive, favoring special interests while harmful in the aggregate. The theoretical basis for free trade is unassailable, and the empirical evidence confirms it. A few months ago, economists at the IMF and UC-Berkeley published a review (https://www.nber.org/papers/w25402)

of the tariff policies of 151 countries in the period 1963-2014, concluding: “Tariffs increases are associated with persistent economically and statistically significant declines in domestic output and productivity, as well as higher unemployment and inequality, real exchange rate appreciation and insignificant changes to the trade balance.”

Specifically, “tariffs encourage the deflection of trade to inefficient producers, and smuggling to evade tariffs; such distortions reduce welfare. Further, consumers lose more from a tariff than producers gain, so there is “deadweight loss.” The redistributions associated with tariffs tend to create vested

interests, so harms tend to persist. Broad‐based protectionism can also provoke retaliation which adds further costs in other markets.” These deleterious effects are graphed below. 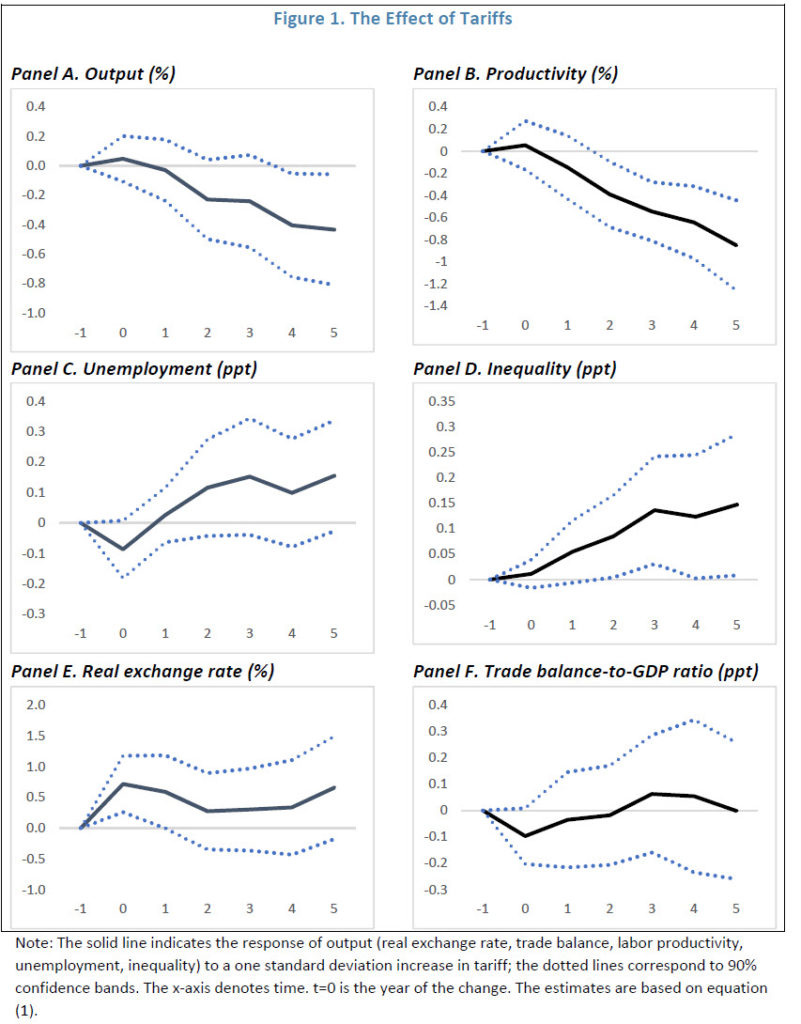 Let’s re-state the evidence: tariffs decrease economic output and lower productivity, raise unemployment and inequality, and have no impact on the trade balance, which was presumably the rationale for imposing tariffs in the first place.  The trade balance doesn’t improve mostly because currencies adjust, as we are seeing now.  A year ago (June 2018) President Trump announced his first round of tariffs on Chinese goods. Since then the renminbi has depreciated about 9% (before this week). Economists at Bank of America estimate that since this round of tariffs went into effect the US imported $523 billion of Chinese goods and imposed tariffs of $62.5 billion. But the FX depreciation of the renminbi offset 77% of these tariffs, meaning the total effective tariff on Chinese goods is $14.3 billion, or just 2.7% of the total imports from China, an immaterial amount that highlights the futility of using tariffs as a weapon of (trade) war.

Berry Gordy reluctantly consented to releasing a single version of The Temptations song with Edwin Starr as lead singer. Norman Whitfield, a co-author of the song, was sole producer on the single and imbued it with an edge more suited to the gritty voice of Starr. Released in June 1970, it quickly went to number one. It won Starr a Grammy for Best Male R&B Vocal that year, and became the anthem of the anti-war movement.

There is no question the US has legitimate trade grievances, including, most importantly, theft of intellectual property. But tariffs are poor weapons in a trade war, not only ineffective but counter-productive, causing more harm than benefit, creating more losers than winners. The answer to the question, what are tariffs good for?, is the same as Edwin Starr said about war: Absolutely Nothing! (Now, say it again!). 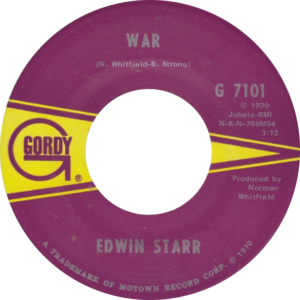