Markets have taken today’s employment release as evidence of a weakening jobs market. A mere 173,000 net new jobs were added in August, below the consensus figure of 217,000. But, coincidentally, 44,000 more jobs were added to previous months’ figures. So, you could say we were right on expectations. Clearly, today the markets disagree.

The unemployment rate fell to 5.1%, from 5.3%, and the labor participation rate remained at 62.6%, the lowest level since 1977. Baby Boomer retirements (structural) and rising disability rolls (policy—see Graph below—yes, that’s 24 million people) probably account for the bulk of the low participation rate. 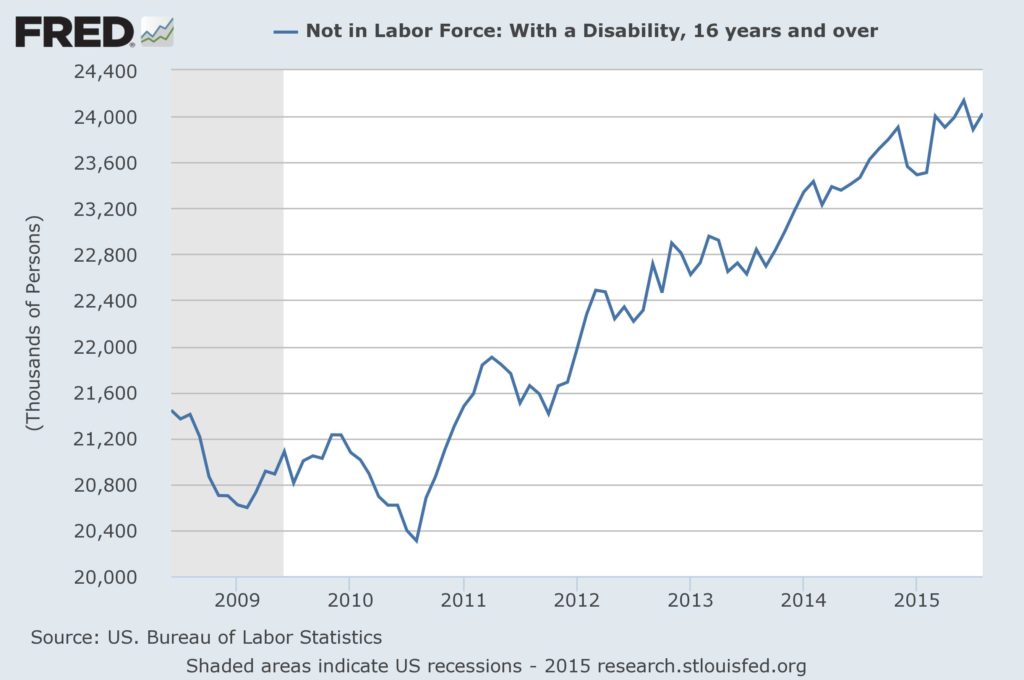 So, I’m making the case that the headline numbers are not as bad as the market seems to think, and the news is encouraging even as we look a little deeper. Over the past twelve months, the economy has added more than 2.9 million net new jobs, well in excess of population growth, much less labor force growth. This growth has occurred even as part-time employment has fallen by 765,000.

Average hourly earnings are up 2.2% from a year ago, a little ahead of inflation, but hours worked are up 2.7%, so workers’ cash earnings are up 4.9%. Looking even deeper, there is reason to be optimistic about future wage growth, particularly as we see the “quit rate,” the percentage of workers switching jobs, move higher. There is a very strong correlation (0.9) between the quit rate and wage growth (see Graph below).

Markets will be volatile (to paraphrase J.P. Morgan), but the employment picture remains encouraging.