Successful investing is frequently about balancing valuation with growth prospects. We would all love to invest in cheap assets with strong prospective growth, but most of the time, we’re forced to choose: valuation usually reflects prospects.

Emerging markets (EM) equities is one of those areas that offer seemingly cheap valuations with attractive growth. But upon closer inspection, the picture is a little more complicated.

First, to valuation. The MSCI EM Index trades at a forward P/E multiple of 10.8 times, well below the MSCI World Index of nearly 15 times. But the EM Index is heavily skewed by the cheapness of China and Russia: those two countries trade at less than 7 times forward earnings while the rest of EM trades at 12.5 times. 12.5 times is cheaper than the World Index, but it is not historically cheap (it peaked at 14 times in 2008). So, EM looks cheap, but it’s really because China and Russia are especially cheap.

Next, to growth prospects. Historically, there has been a close correlation between earnings and equity prices. Over the past 5 years, the MSCI EM Index is up just 0.79% p.a.. It’s no coincidence that earnings in that index are essentially flat over this period (see Chart 1). So there’s been no earnings growth, and no gains in equities. Likewise, the relative performance of EM to developed markets (DM) is closely correlated to the relative GDP growth rates. In 2008, EM countries were growing at a 7% pace faster than DM countries; today, that differential has shrunk to just 4% (see Chart 2).

Most EM countries have high valuations along with faster growth (Thailand and the Philippines, especially, stand out). There are some countries within EM that may offer the combination of cheap valuation and rising growth (Brazil, Korea, India, perhaps).

EM (broadly) will outperform when profits and economic growth accelerate relative to the rest of the world. It would be additionally helpful if valuations were also cheap. With a few exceptions, those two conditions, relative growth and low valuations, do not yet appear in the EM world. 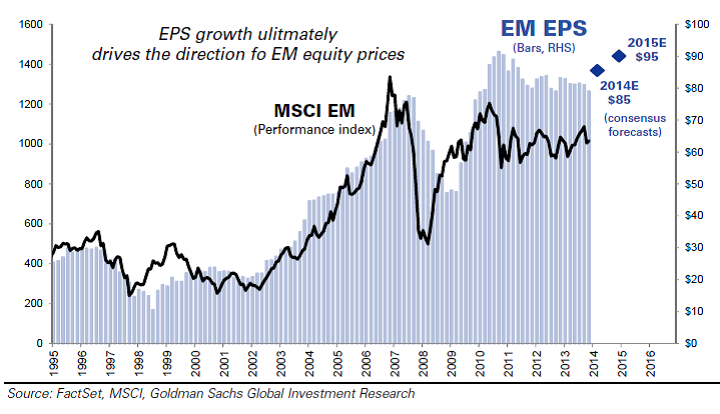 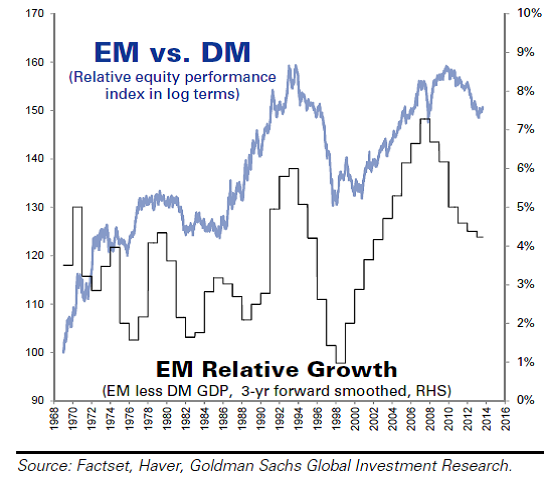