In November 1942, with the Battle for Egypt under way, Winston Churchill addressed his nation with these words:

Words meant to rally a nation engaged in an existential battle that very much hung in the balance. Churchill grasped at some tentative victories that would, in fact, mark the end of the beginning phase of the war, one which saw Allies routed from Calais to Hawaii.

Government bonds rarely post a net loss in any given calendar year. 1994 was the worst in the past 30 years, as the Fed tightened unexpectedly in February that year, and didn’t stop till the calendar flipped and overnight rates had doubled, from 3% to 6%. I recall a number of prominent bond managers appearing shell-shocked throughout that year (with commensurately dismal total returns).

As we near the half-way mark, 2015 may yet turn out to be an even worse year for bonds (see Chart below). But this time, the catalyst is not a surprise move by central bankers; indeed, the upcoming Fed rate hike has been the most anticipated event since….(well, I don’t know; I was going to say a Khardashian wedding, but that’s really poor taste). No, the Fed has no surprises for the market this time. Rather, I think, it’s just the simple math that it takes a small move when yields are so low to negate the meager coupon. I noted previously that a 30-minute sell-off in German bunds the other month wiped out 30 years of interest payments to investors.

Bond investors for the past three-plus decades have enjoyed the greatest bull market in that asset in memory, possibly in recorded history. It may yet be premature to call this year as the end of that bull market, but it is almost certainly the beginning of the end. 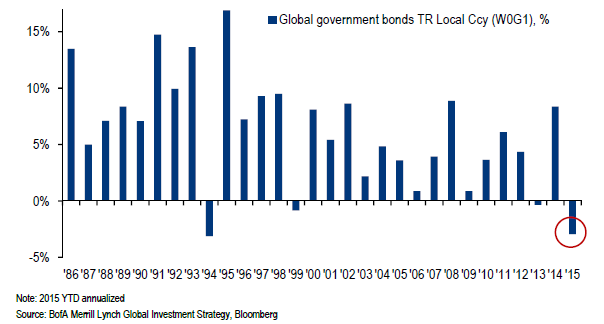