Earlier this week, China devalued its currency 1.9% against the US dollar. On one level, this is not a big deal. China’s currency has been appreciating considerably for many years (see Chart 1 for the last five years; note the scale is inverted). Even in the past year, the yuan is down just 3.5%, whereas our largest trading partners—the Canadian dollar, Mexican peso, yen and euro—are each off 15-20%. So, who cares?

Perhaps we need a distraction from the Donald Trump – Megyn Kelly spat, and mid-August is typically a sparse news period, but some pundits are trying to stir concerns that this move (a) presages a coming collapse in the yuan, and/or (b) will stop the Fed from tightening rates next month, thus the devaluation is a significant event. Support for Argument (a) comes from the numerous historical examples of countries failing to support a failing currency. Argument (b) rests on the assumption that the RMB devaluation is a de facto tightening of US monetary conditions and the Fed will be hesitant to tighten further.

I don’t see the action by the People’s Bank of China necessarily leading to either event. But neither do I fully accept the official explanation that the government simply wants to be more responsive to market forces.

GDP is growing (officially) at a 7% pace, the lowest in many decades (see graph below for the past 15 years). Many believe, though, that the official numbers overstate the growth rate, which may be closer to half the official number. 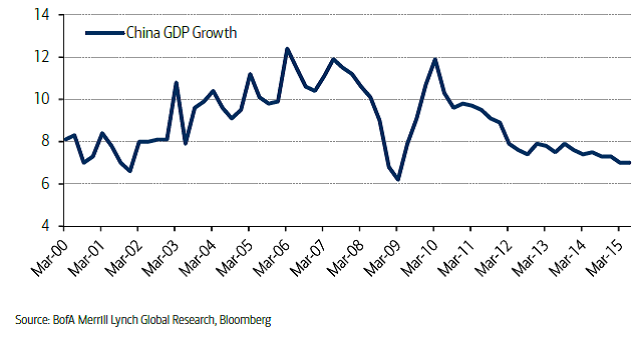 As I see it, the devaluation is a clear signal that the Chinese economy is struggling, requiring more stimulus than the steps previously announced, such as easing credit and supporting stock prices. A collapse in yuan is not going to happen, not with $4 trillion of foreign reserves, and the Fed is not going base its policy on a 1.9% decline in the RMB. But China’s economy does impact the world, and a significant slowdown in its growth will be felt throughout the global economy. This small devaluation does not mean there is major turmoil ahead, but it does say that China’s growth is sputtering, and that does matter to all of us.